The Drive Foundation welcomes Boyan Pinter to the Advisory Board 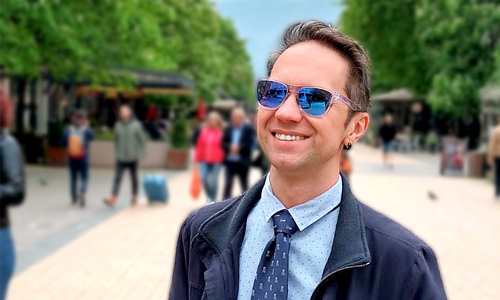 Boyan Pinter (né Boiadjiev) has been working in Music for 22 years. He wasformally trained as guitarist and composer under the tutelage of Allyson Applebaum (Wells) Ph.D. in Houston, Texas. Jumping from being a stage performer to a production coordinator, Boyan wanted to get involved on a deeper level with the programming and organization of large-scale events, which led him to work with the Lotus World Music And Arts Festival in Bloomington, IN under Lee Williams and LuAnne Holladay. In the early 2010s Boyan was called to work as an event production specialist in Bulgaria where he worked with some of the biggest names in music including Aerosmith, Mark Knopfler, Nigel Kennedy, Hans Zimmer, Cirque Du Soleil, Iron Maiden, Roger Waters, Queen + Adam Lambert, etc.

Boyan is a regular attendee and speaker at music conferences where he talks, among other things, about the grueling behind the scenes schedule that production crew members face on a daily basis. He currently books international shows for venues in Bulgaria and the wider Eastern European region and is the founder of SPIKE – Bulgarian Music Showcase: a platform for networking, education, and showcasing young artists and songwriters. His commitment to production has earned Boyan a place in the crew of the Green Futures Field at Glastonbury Festival, the largest and most prestigious event in Europe, which welcomes the biggest names in music to an audience of 175 000 people.

„It is a real privilege for me to be joining the Drive Foundation as an honorary board member. Mental Health is truly the proverbial elephant in the room that we never properly address when dealing with the stresses of the industry. I see many examples of the impact it has on both seasoned and developing music professionals across the industry. I am excited to share my knowledge and experiences and use my network to raise awareness of these issues. I look forward to developing workshops and programs that help our people recognize triggering situations and help them cope and recover from the inherent mental imbalance that our work brings about.”